Abandoned at the altar…

A man devastated by love

After three years of carousing and debauchery, Alex Cartwright, heir to the Duke of Hastings, has put his life back in order. Having embraced sobriety for two years, he has no intention of revisiting the past or risking his heart again. But the return of the very woman who introduced him to the darkest side of hell brings not only the painful, haunting memories of bittersweet love and abandonment, but the son he never knew he had…

A woman silenced by secrets

Threatened by the revelation of a secret that could destroy her family’s place in society and forever tarnish a dukedom, Charlotte fled England on her wedding day five years ago. Now, although it appears that secret is safe, when Alex discovers her other secret—their son—Charlotte has an altogether different battle ahead. She must now fight one love to hold onto the other—the man whose touch still makes her burn, for the child who is her very world.

"What drives this surprisingly deep novel are its revelations and their aftermath... Highly recommended for historical romance fans." ~ Library Journal, Starred Review 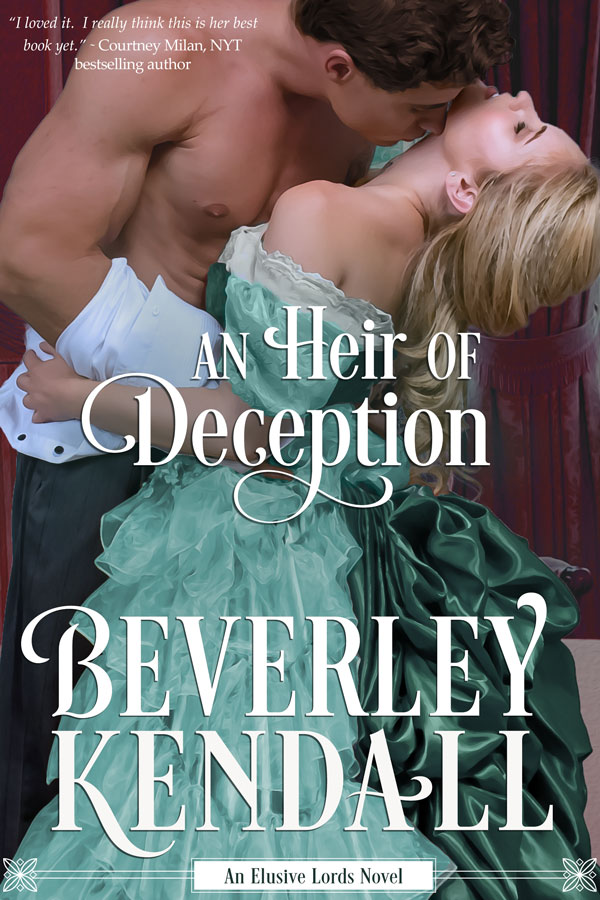 In the following scene, Charlotte has just returned to England and is seeing Alex for the first time in the five years since she left him on what should have been their wedding day.

A movement, a figure, in the corner of her vision halted her speech. Charlotte shifted her gaze. Her breath and her world came to a shuddering halt.

He rounded the stretch of hall leading from the study. Their eyes met across a distance of some forty feet.

Her breath left her completely then. The air surrounding her became charged and hot. His stride might have faltered but he recovered so swiftly, she couldn’t be certain she hadn’t imagined it.

Charlotte stood frozen, ensnared as deftly and completely as a rabbit in the presence of a rattler preparing to strike. She watched as he proceeded down the seemingly endless corridor toward her.

Senses starved for the flesh and blood man greedily tried to take him in all at once, hoarding away every minute detail to take back with her to feed the lonely nights when dreams and memories were all she’d have…and yet still not enough.

Save the measured fall of his footsteps, silence reigned with a parasitic presence that made speech a novelty and breathing a luxury. Charlotte could do nothing but wait in statue-like stillness while her heart picked up its pace. To even blink would have been unimaginable.

As he drew closer, she began to make out the subtle changes time had wrought in his visage.

In appearance, he looked much the same as the man she’d known and loved—loved still. With hair the black and shine of obsidian brushing the collar of his morning coat, and the delicious little dimple in his chin, he had always been surfeit in looks. But the Alex of old had possessed a wicked sort of charm. His smile, lazy and hinting at deeper passions, had caused the palpitation of many a female hearts. Upon their betrothal announcement, the gossip sheets had stated the sound of those very same hearts breaking could be heard from Cornwall to Northumberland.

At present, however, it appeared no smile would dare venture near his lips. Faint lines bracketed his mouth, the surrounding skin taut and unforgiving in its sternness. And there was an iciness in his expression that pierced her heart with a corresponding blast of cold. He even carried his lean muscular frame with an aloofness, tight and very controlled.

Any hope that she would find in him a smidgeon of warmth, an inkling of the affection he’d once felt for her, wilted and died under his regard. Yet she remained resolute as he advanced upon her, awaiting the first words they would exchange since the day before what should have been their wedding day.

With his every step, her anxiety climbed and her heart stumbled over the hurdle an ocean and five years had created. Twenty steps separating them became ten and then five. He stopped just shy of an arm’s length of her. Continuing to imprison her with his silver-eyed gaze, he finally spoke. “I see you have company.”

Charlotte nearly wept at the sound of his voice, a smoky baritone. Perhaps that was the reason it took her a moment to comprehend he was speaking to Catie and not her. That it was she to whom he referred to as ‘company’.

“Alex, I had no idea you were here,” her sister said with an uncharacteristic catch in her voice.

After a taut silence, he yanked his gaze from Charlotte’s and turned to include her sister in his regard as well as his address. “I instructed Reeves not to disturb you when I arrived. I’m just here to retrieve some documents your brother left for me.”

It was then Charlotte noticed the large envelope clutched in his hand.

Never had Charlotte heard her sister stammer so. Given the circumstances, it was she who should be rattled and out of sorts. She was all that and more.

“So I see,” he replied in clipped tones, keeping his gaze averted from her. As telling and deliberate a gesture as she’d ever witnessed.

Charlotte knew then she would have to initiate any form of communication between them. And who else should do it if not her.

“Hullo, Alex,” she said, finding her courage and her voice. But never had two words taken so much effort to speak.

His jaw firmed, his nostrils flared and an ominous stillness settled over him. A moment later he gave her sister a brisk nod. “I shall leave you to your guest. Good day, Catherine.” His gaze did not venture in her direction again. It was as if, to him, she’d ceased to exist.