Lord James Rutherford fights the inexorable demise of his bachelorhood with every sane bone in his body. But the single-minded pursuit of the delectable Missy Armstrong entering her fourth London Season proves his undoing. Just as he’s decided to risk the wrath of her brother—his friend—and right the wrong of their indiscretion, James discovers the consequences of a forgotten night of drunken passion has left yet another lady of ton compromised.

For Millicent ‘Missy’ Armstrong, being ruined by the man of her dreams is nothing to wring her hands and bury her face in her hands about.  But when an offer of marriage isn’t immediately forthcoming, and whispers of James’s betrothal to another—and pending fatherhood—reaches her ears, there isn’t an acre of land on the Continent far enough on which to escape. Then, in an abrupt reversal, James is back on her doorstep with the offer she’d yearned to receive…two weeks and one woman too late.

In the face of her unwavering refusal, James launches a war to win back her passion, her trust, and her love. A war as ruthless as it is seductive. With the wounds of her heartbreak still fresh and raw, now he must convince her that far from the second choice, she has always been the only choice for him. 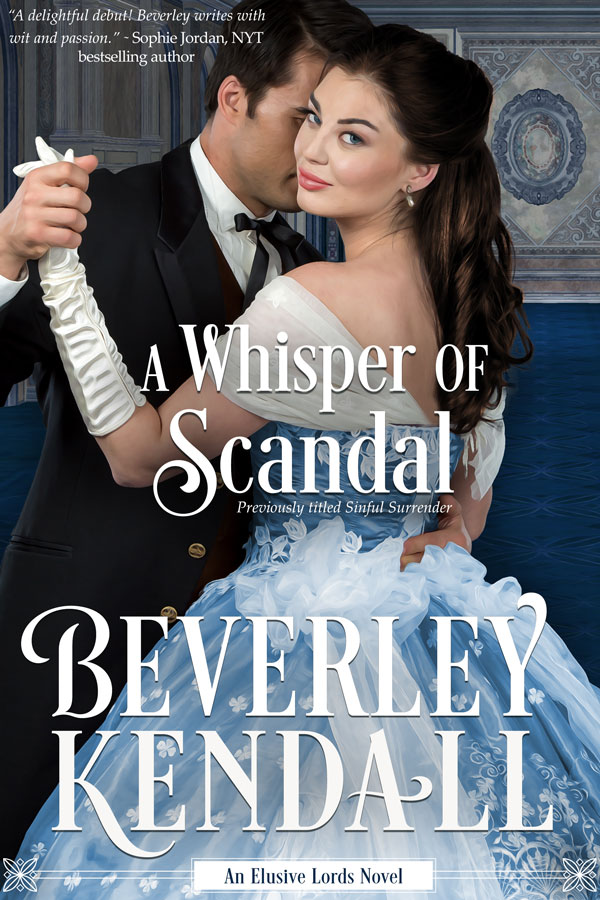 The morning of the highly anticipated eighteenth birthday of Millicent ‘Missy’ Armstrong—highly anticipated by her, not him—James Rutherford discovered too late that escorting her from the stables had been a monumental error in judgment.

If they hadn’t been walking the quarter mile back to Stoneridge Hall, she would not have stumbled and fallen. There would have been no need to assist her to her feet. He certainly wouldn’t have been jerked from his own, to land sprawled atop her, slender arms wrapped tightly about his neck, pulling his head down to land an impassioned kiss on lips parted in dull surprise.

Damn and blast! This was precisely the kind of temptation he could ill afford, and had done his best to avoid as this day had closed in on him with the swiftness of the finest pair of blacks in full gallop. A grown up Missy still suffering the pangs of a long held infatuation and entering the marriage market was a road fraught with endless pitfalls. One he’d obviously stumbled upon and currently had him cushioned by only the kind of softness and heat a female could render. And yards upon yards of muslin.

For a shameful moment—or perhaps shameless—he didn’t extricate himself from her embrace, as surely the friend of her brother would if he at all hoped to maintain the friendship. Instead, he savored the waft of her warm breath against his cheek, and discovered the softness of her eager, exploring lips. He discovered she wore the faint scent of lilacs. But the worst of his discoveries was what sprang to rigid attention beneath the front flap of his riding breeches.

Good God, what the blazes was he doing? Armstrong would skewer him clean through if he knew the sorts of thoughts James currently entertained about his sister.

Emitting a hiss then a tortured groan, and with the sweet taste of her still on his lips, he scrambled from atop her, levering himself to a standing position. Never had the ground felt so uneven beneath his feet or his stance quite so unsteady. Swiftly, he turned and offered her his back, drawing in a ragged breath of the cool April air. A sweeping survey across the rolling hills of Dartington revealed not a soul in sight. He should be relieved there’d been no party to the kiss. He wished he could breathe easy. His raging erection made it all but impossible.

Sounds of her scrambling to her feet finally penetrated above the blood roaring in his ears, as did the brisk brush of hands against cloth as she went about ridding herself of dewy blades of grass and the dirt clinging to her green-checkered day dress.

“James?” His name hitched in her throat, the lone syllable seeming to encapsulate a lifetime of yearning.

He suffered his remorse in silence as he could well imagine the accompanying wistfulness in her eyes and the faint tremble of her pink bottom lip. Ensuring his jacket adequately covered his state of arousal, and with his mouth in a grim line, he pivoted on his heel to face her.

“I thought you might liked it if I kissed you. Might want me to kiss you.” Arresting blue-gray eyes peered up at him from beneath long, sooty lashes, her expression poignant in its vulnerability.

His reaction to her was inexcusable. Reprehensible really. She was off limits to him. Armstrong had made that point clear enough when he’d demanded James give her a wide berth. At least during her debut into Society. Her crush would inevitably run its course. Or so his friend hoped. And should Armstrong have his way, she’d marry the much admired and ardently pursued heir to the Wiltshire dukedom, the Earl of Granville. Why shouldn’t she marry an exalted title, his friend had reasoned, now that the Armstrong family could no longer be considered impoverished nobility, their fortune regained and currently far in excess of most in the upper stratum of society.

“Missy,” James began, but her name came out hoarse, forcing him to clear the alien object from his throat—which he belatedly identified as his tongue—to begin again. “Missy, you’re like a sister to me,” he said in a solemnity honed to pitch perfect sincerity.

Lying to her was not only prudent, it was now a necessity. Unfortunately, for him—for them both—any sisterly feelings he’d had toward her hadn’t been able to withstand her breathtaking emergence into womanhood. Her previously tall and thin frame had developed enticing, feminine curves, and the promise of beauty he’d first seen in the ten-year-old chestnut-haired child had far exceeded his expectations.

A look of hurt flitted across her face that had his heart constricting in painful response.

As if he needed a reminder. It was his relationship with Armstrong that kept him from taking what she was offering. Her beautiful body for his delectation. Although, in all honesty, even if her brother wouldn’t have him strung up by the noose outside Newgate prison if he ever laid a hand on her, Missy deserved much more than giving away her innocence to a man who could never be to her the husband she needed him to be. The kind of husband she deserved.

“What I’m saying is that I have no interest in you like that…in a romantic sense.” Lust was an entirely different matter altogether.

The sad fact was that truth had existed up until the prior year. What he wouldn’t give that it should exist again, that he be unaware again.

His innocence was interminably lost.