She hopes to gain his affections

For Miss Elizabeth Smith, sharing her first kiss with the charming Lord Derek Creswell is nothing short of a dream come true…that is, until she is spotted by one of the most influential gossips of the ton. With scandal nipping at her heels, to avoid total social ruin, Elizabeth must present a fiancé by the end of the Season. But when the viscount proves reluctant, Elizabeth is forced to employ a seduction of a different sort…

He is determined to ruin her

Viscount Derek Creswell believes Elizabeth set out to trap him into marriage. After all, her sister attempted the very same thing with his brother six years before. Now the delectable Miss Smith expects a betrothal and a ring, while Derek finds her ruination infinitely more appealing…

But as Derek sets out to seduce only her body, Elizabeth is intent on claiming his jaded heart. 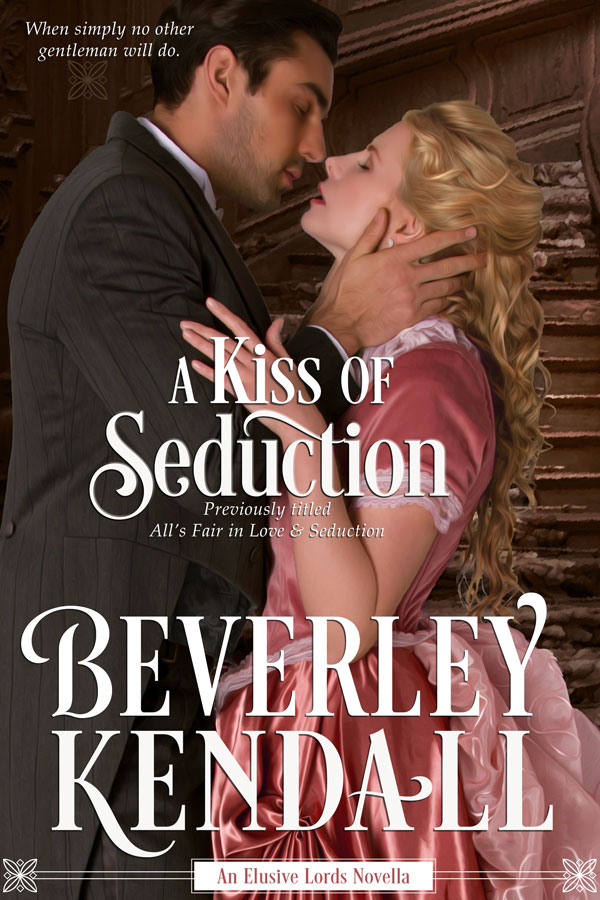 “Perhaps, we should come back during the daylight and that way I can see it properly.”

“Come let us look at the rooms upstairs,” he said as if she hadn’t spoken. Placing his hand on the small of her back, he urged her toward the staircase.

Elizabeth looked up at him, her protest poised on the tip of her tongue when she saw the lust in his eyes. But that wasn’t what gave her pause; it was the glimmer of satisfaction in making her wary and nervous.

By God, he knew she wasn’t about to just let him have his way with her. Certainly not before they married. So what was his game?

“And is that where you hope to seduce me?” Her parents would be appalled had they heard her. She was astonished anything in that vein was able to pass her lips.

Lord Creswell didn’t respond until they reached the first door on the third floor.

No doubt a bed was on the other side of that door.

He turned to her. “If I may be frank, Miss Smith…Elizabeth.” He spoke soft and low, and somehow her name on his lips sounded more intimate than a kiss. “I am a man who likes to leave nothing to chance. If I am to court and marry you in such unfashionable haste, I would like some assurance that you and I suit when it comes to the intimacies of the marriage bed.”

At his words, lust in its most pure form accosted her. Parts of her went soft while other parts became rigid, pinpoints of pleasure to come.

No. No. No. There would be no pleasure of any sort. Not for her and definitely none for the viscount.

“So you would like us to have marital relations outside the sanctity of marriage?” she asked in a voice she barely recognized.

“You’ve been so skittish of late. If I hadn’t already kissed you, I’d think you didn’t like to be touched. When I marry, it’ll be for life and I have no desire to saddle myself with a wife who cannot perform satisfactory in that area.” Lord Creswell turned, his back to her as he faced the chamber door. But on his face, she glimpsed the barest hint of smile.

So that was how he thought to get around marrying her. He thought she’d cry off, refusing to enter his philistine game of sampling the goods.

For several long seconds, Elizabeth said nothing, allowing him to believe she was grappling in indecision. His hand released its grasp on the handle of the door and he straightened as if ready to claim victory.

“Very well, if that’s what it will take to ease your mind—ease both our minds—let us proceed. But I must have your assurance that once we’ve established that we suit, um, in that way, we will immediately announce our betrothal and set a wedding date.”

Elizabeth took great satisfaction in watching Lord Creswell’s entire form stiffen and his hand still in mid-air. Slowly, he angled his head over his shoulder to regard her, incredulity flashing briefly in the blue-green depths of his eyes. “You are in agreement?”

Feigning the stalwartness of that of a virgin about to be sacrificed for the good of God and country, Elizabeth gave a tremulous but firm nod.

Did his voice sound a mite strained?

“I have a feeling we shall suit very well.” She gave him a slow smile. “Shall we proceed, my lord?”